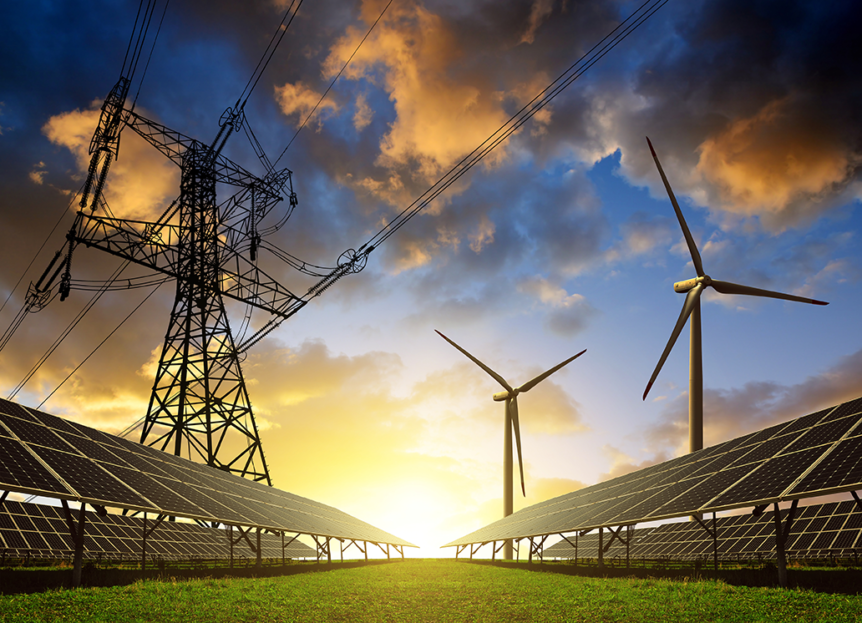 Last Friday, tens of thousands of school students went on “strike”, imploring politicians to finally Get Serious about climate change policies, and urging a switch to 100 per cent renewable energy by 2030.

Can’t be done, they were told.

Readers may remember, however, that ANU researchers Andrew Blakers and Matt Stocks in February said that if Australia continued at its current rate of wind and solar deployment, then enough to meet the equivalent of 100 per cent of the country’s electricity needs could be delivered by 2030.

Now, new research from the Norway-based research company Rystad says the pipeline of wind, solar and storage projects in Australia will likely reach 100GW before the upcoming federal election in May, including those in “concept” stage, and those seeking development approvals, already have DAs, have won contracts, are under construction, or are already built.

Of course, not all these projects will be built at the scale envisaged. There may be local issues, connection hurdles, financing challenges and market headwinds. But if they were, they would deliver enough megawatt-hours to deliver Australia’s current demand.

Of course, getting to 100 per cent renewables for electricity is not simply a matter of building lots of solar and wind farms. As Blakers and Stocks noted, it needs a plan, and it depends on where this capacity is built, and how it is connected. It also depends on how much storage there is, in both capacity and duration.

And such a dramatic switch would require a wholesale review of market rules and practices to deal with the new technology, and fast-response batteries in particular. Given that many developers could probably construct a small solar farm in the time it takes for regulators to agree on the change of a paragraph in the National Electricity Rules, this looms as a major hurdle.

And, it should be noted, even though nearly every utility and energy expert accepts that the energy transition is inevitable, there is still great debate about how quickly it could or should be done.

Still, the existence of such a huge pipeline of projects underlines the global and national interest in what is happening in Australia, and the depth of resources that can be exploited if the other issues are resolved.

Rystad describes the 100GW level as a “symbolic milestone” and says it follows a “blistering start” to the new year in which 6.65GW of new capacity from 62 assets were added to its data-base in January and February – more than double the capacity and number of assets that were added in the same period last year.

These new projects include an additional 2.9GW (AC) of large-scale solar, and another 1.4GW of wind. But it is the 2.4GW of storage (a rise of 25 per cent) that catches the eye. 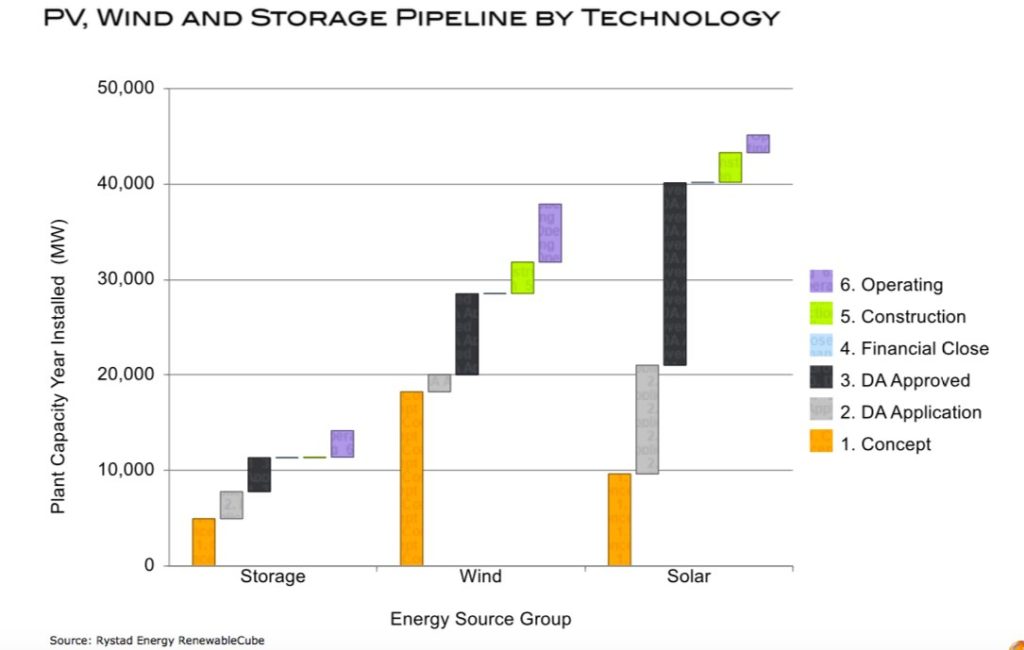 The breakdown of the Rystad data base is as follows, and is also illustrated in the graph above. There is just over 40GW of solar in the pipeline, including 9.6GW of “concept”, 11.4GW awaiting DA approval, and 19.2GW approved. And about 5GW already built or under construction.

There is just under 30GW of wind in the pipeline, with 19.4GW in “concept”, 1.8GW in DA application and 8.5GW in DA approved. The difference in numbers shows the switch to solar technologies as it matches wind in price, and usually has less DA issues.

Storage is the big new player and is split between pumped hydro (PHES) and lithium-ion batteries. For PHES, there is 3.5GW in concept (which includes Snowy 2.0 because it has yet to get DA approval), another 500MW awaiting DA, and 500MW if DA approved.

Lithium-ion batteries have 1.2GW in the “concept” stage, another 2.3GW awaiting DA approval, and another 2.9GW with DA approval. “The battery pipeline has grown exponentially,” Dixon says. 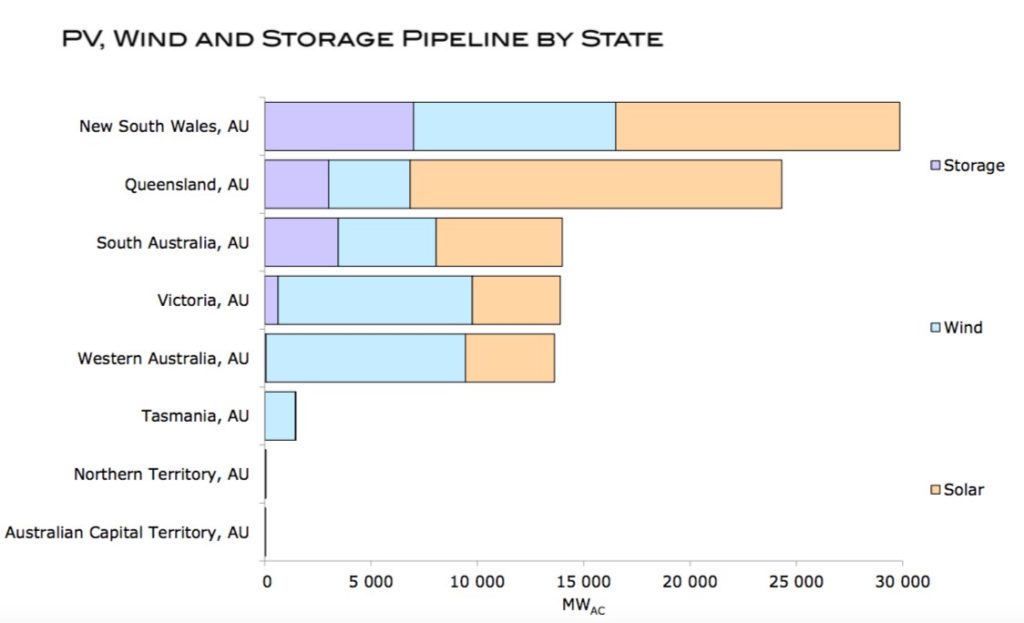 The state break down clearly demonstrates that NSW is leading the way in aggregated totals, Queensland is dominated by solar projects, and South Australia – even though it is already at more than 50 per cent wind and solar – also matches Victoria and W.A.

South Australia is predicted, by the market operator, to install another wind and solar capacity to deliver the equivalent of 100 per cent of its demand as early as 2026 or 2027.

The concept projects include what might be described by some as thought bubbles and land and network prospecting.

But it also includes mostly serious ventures such as the giant Asia Renewable Energy Hub project in the Pilbara, backed by Vestas, Macquarie Group and CWP – which aims for some 11GW of wind and solar that could be exported to Asia, either directly via a sub-sea cable, or via a transportable fuel such as ammonia.

Other projects include the4GW Walcha project in NSW, proposed by Energy Estate and Mirus Wind, which aims to combine huge amounts of wind, solar and storage for the biggest project proposed so far for the main grid, and the 2GW Star of the South offshore wind project in Bass Strait. 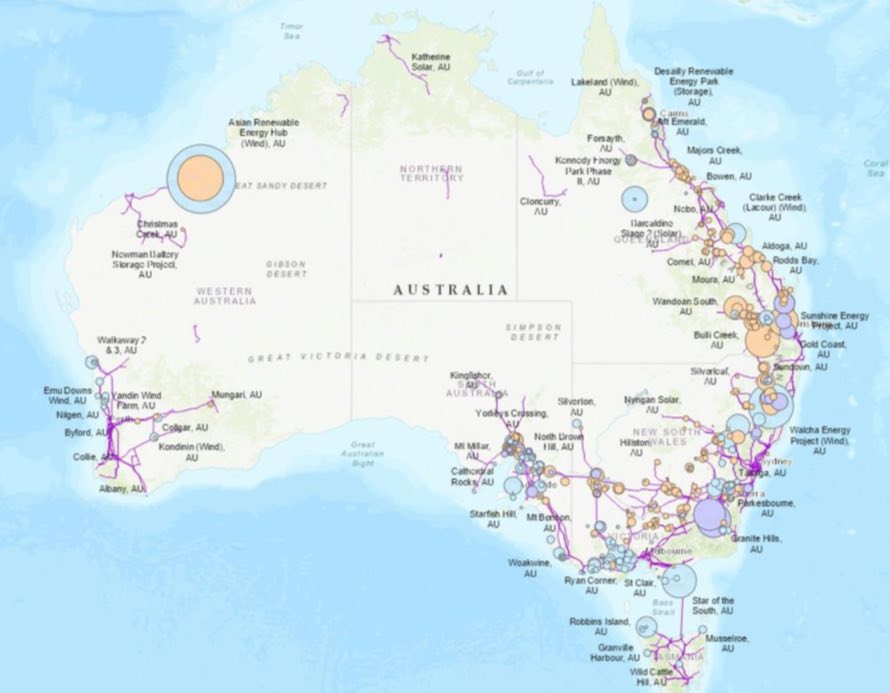 Would all of this be enough for 100 per cent renewables energy for Australia’s electricity needs?

“Easily,” says Ben Elliston, a co-author of one report into 100 per cent renewable energy options published by the UNSW three years ago.

Elliston says, however, there are a lot of different answers to what 100 per cent renewables might look like, and the work of his team has possibly been over-run by unexpectedly quick cost reductions in solar.  “I would expect to see less wind and more PV if (the study) was repeated today.”

The ANU’s Blakers and Stocks say that 100GW should be sufficient, but reaching 100 per cent renewables will ultimately depend on the mix and the location, and to the amount of storage, and transmission available.

“The amount of storage we need to support this is well short at present,” Blakers says. “We need an additional 450GWh of energy with 20GW of power, which can come from a combination of pumped hydro, batteries and demand management.

“We also need quite a lot more transmission. However, the cost of this additional storage (+ associated transmission) is only about $25/MWh (considerably less than the cost of the PV & wind that it supports).”

And, there will also likely to be a need for more electricity, as electric cars become the main form of transport and as heat pumps and other technologies push oil and gas heating our of buildings.

This was written by Giles Parkinson for RenewEconomy.com.au  To see the original version of this story, please click HERE.