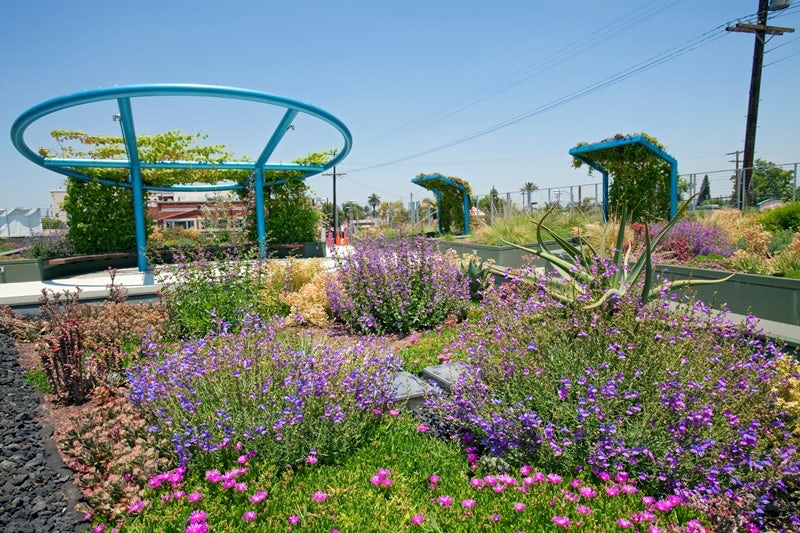 Most water agencies don’t think of local water projects like green roofs or efficiency rebates as assets, but now they can. And that means agencies can now access capital markets for funding, which could help dramatically grow these projects.

IN THE YEARS to come, we’re likely to see a lot more “green” and distributed infrastructure projects from water utilities, like permeable pavement, rainwater capture and efficiency rebates. That’s because coming up with the money needed to scale these projects just got a lot easier.

In the water world, most big infrastructure projects like treatment facilities and pipelines are usually financed by water agencies selling bonds, which can help them raise millions of dollars for a project that only needs to be paid off a little bit at a time over many years. That’s because these projects are owned by the agencies and are considered an asset on which they can capitalize.

But turf removal programs, green roofs and other localized water projects that can have significant impact on water consumption – often referred to as “distributed infrastructure” – weren’t typically considered an asset because they weren’t actually owned by an agency. Instead rebates for these kinds of projects were funded from operating budgets, which often isn’t enough to really scale such efforts.

But the Government Accounting Standards Board (GASB), which is an independent organization that establishes accounting and financial standards, approved a policy implementation guide on May 7. This time one of the guidelines it addressed was Statement No. 62 (also referred to in shorthand as GASB 62).

GASB 62 has actually been around for years, but it wasn’t well known. That prompted GASB this month to clarify the language around “business-type activities” of public agencies.

“There is a universe of things that public agencies spend money on. Some of it is straightforward: If you’re buying chemicals every year, that’s an annual expense, and if you’re building a treatment facility, that’s a capital asset,” said Cynthia Koehler, executive director of the San Francisco-based nonprofit WaterNow Alliance and board member of the Marin Municipal Water District. “In between are things that GASBrecognizes as ‘business type activities’ of public agencies.”

While this language may be new to many folks not in the accounting world, what it means in the real world is that many water agencies will now be able to use bonds to fund things they didn’t typically consider an asset before. In particular, distributed infrastructure projects.

If a public agency can do that, “the money you spend can be considered an asset and once you have an asset you can bond-fund it,” said Ed Harrington, who served as the controller for the city and county of San Francisco and later as the general manager of the San Francisco Public Utilities Commission until he retired in 2012.

This is a big shift for most water utilities, which are used to thinking about fixed things like pipes and pumps as assets. But GASB’s latest guideline is confirming that this practice of capitalizing regulated operations is definitely above board. “This guidance connects the dots from a statement that has existed for some time, specifically to water utilities and how they book expenses for distributed infrastructure,” she said.

Now utilities can raise a lot more money for distributed infrastructure projects that they can then pay off slowly over many years, instead of trying to finance projects with cash on hand. That opens up the door to more money for initiatives like cash-for-grass rebates, leak detection devices, rainwater capture, graywater reuse, green roofs, constructed wetlands, permeable pavement, direct installation of high efficiency toilets or fixtures, and smart irrigation control rebates.

These distributed infrastructure projects have huge potential. A 2014 report from the Pacific Institute, an Oakland-based global water think-tank, found that there’s the potential to save 3.1 billion to 6.4 billion cubic meters (enough water for 5.8 million to 10.4 million families a year) through efficiencies in the urban water sector alone in California. “Our analysis focused on the savings that could be achieved through more widespread adoption of technology and practices that are available and already in use in California and elsewhere around the world,” the Pacific Institute found.

And that will bring more than just financial benefits, said Rowan Schmidt, program director for finance and investment strategies at Earth Economics, a nonprofit that helps organizations make investment and policy decisions by taking nature into account. “Green infrastructure will support core services, but you also get these co-benefits out of it like increased resilience compared with centralized infrastructure, as well as health benefits and property value improvements.”

If a community has issues with flooding, for example, Harrington said, instead of using pipes and pumps to tackle the problem, agencies can explore other distributed or green infrastructure options. “You can say I’m going to go much more into permeable pavement, green roofs, those kind of things that use nature, that bring the water back into the aquifer, that avoid flooding, that can be very efficient and cost effective and can be done much quicker,” said Harrington. “It’s not to say you’re never going to need pipes and pumps, but you could probably meet a good amount of the flooding problem if you just returned things back to the way they were before there was so much concrete.”

The next step now is getting the word out, said Schmidt. “I think there is a lot of education required. How do we get the mechanism to scale up across thousands of utilities and special districts across the country?”

The challenge, added Koehler, is for groups like WaterNow Alliance and Earth Economics to help explain what this opportunity is all about, and to socialize and normalize it. “Opportunity is the operative word,” she said. “There’s no mandate here. What to me is great about it is the flexibility. It’s there if you want to use it, it’s this opportunity, but nobody is forcing you to go this way.”