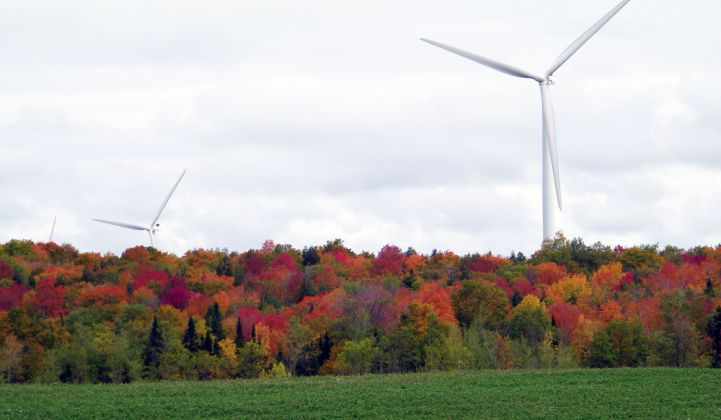 In a world where wind and solar resources make up 40 to 50 percent of generation, wholesale energy prices will drop by as much as $16 per megawatt-hour, according to a study released Wednesday from a group of researchers at Lawrence Berkeley National Laboratory.

Modeling 2030 scenarios in which CAISO, NYISO, SPP and ERCOT reach combined wind and solar penetration at or above 40 percent, the researchers found electricity prices will fall — but price fluctuations may increase and the number of peak net-load hours will spread to a greater number of days.

According to co-author Joachim Seel, the study offers a “holistic” analysis of price formation in a decarbonizing market. He said that data is not generally available to the public.

Researchers hope the results, part of a three-part study stretching into the next several years, will offer policymakers, utilities and grid authorities a long-range view of how current choices could impact their future ability to cope with changes in the electric sector. Seel said it should help them “make sure their decisions are robust in a high wind and solar future.”

In SPP, NYISO and CAISO, prices fell most under a high solar scenario — defined as 30 percent solar and 10 percent or more wind. ERCOT’s largest drop was in a high wind scenario, with a 25 percent drop in prices. 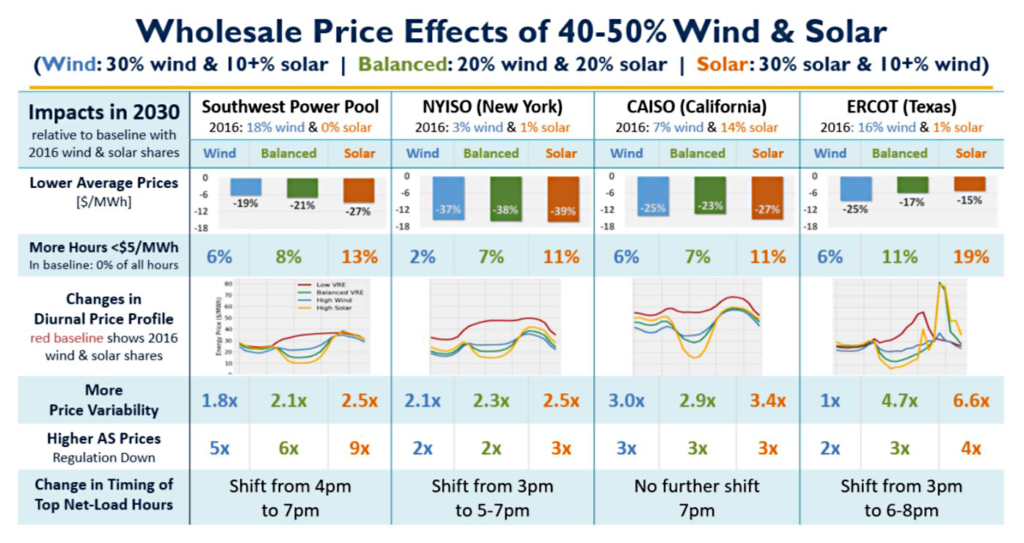 While the dreaded duck curve persists in all the VRE scenarios — most pronounced when solar accounts for 30 percent of generation — it’s generally shifted later into the day.
In higher VRE scenarios, peak net-load is shifted toward 5 p.m. or 8 p.m. rather than 3 p.m. or 4 p.m. In high solar scenarios, peak demand may also shrink to a smaller portion of the day. Prices also see more variability in both high wind and high solar scenarios.

“What we believe to be the most significant is the change in the diurnal price profiles where, especially in the high solar scenarios, we really see this bottoming out of prices in the middle of the day,” said Seel.

Taken together, these impacts indicate the need for more dispatchable resources that can quickly respond to changes in demand or production.

“Units that are able to ramp down their generation at times when electricity prices are very low are going to be least susceptible to those average price declines,” said Seel. “Other traditional, more baseline units such as a nuclear plant or a coal plant that cannot change its output level and only generate during the high-priced hours — it will feel those average price declines much more.”

The authors point to demand response and energy storage as helpful for managing load. However, researchers did not yet assess the impact of storage beyond the 1.3-gigawatt CAISO mandate.
“When we started out in the year 2016 writing this report, storage was not quite as hot as it is now,” said Seel. “Instead of investing in a gas peaker plant, one could imagine that solar-plus-storage could do similar services.”

Prices for ancillary services increased by up to nine times under the new scenarios as well, with a high solar scenario in SPP showing the highest growth.

“Battery developers will see a great business case for themselves,” said Seel. “We believe that storage probably has an important role to play.”

The study partially considered the impacts of nuclear. The Energy Information Administration’s forecast for nuclear generation remains stable, with 99 gigawatts in 2017 falling slightly to 79 gigawatts in 2050. Researchers point to California’s move to close the Diablo Canyon plant as a sign that a higher VRE future might spur nuclear retirements.

But that’s not necessarily the case.

While models indicate retirements of some firm capacity, with most occurring in ERCOT territory, researchers did not find that any scenario forced higher nuclear capacity retirement than the low VRE scenario. Research and development for more flexible nuclear capacity, however, might better help jurisdictions utilize those resources as clean energy capacity grows.

Researchers plan a deeper dive into the impacts on all types of generators, including nuclear and energy storage, in the third phase of the study to be released in 2020.